Quotes about Money from Famous People

By Steve Scott | July 25, 2017
People love quotes from celebrities. Sometimes those quotes are brilliant and sometimes they are amusing.  And sometimes they are neither…  Here is a small collection of some of the best sayings by politicians, entertainers, and philosophers on the subject of money.

“For I don’t care too much for money, for money can’t buy me love.” – The Beatles

“Money is like a sixth sense – and you can’t make use of the other five without it.” – William Somerset Maugham

The glow of one warm thought is to me worth more than money.” – Thomas Jefferson

“Time is more valuable than money. You can get more money, but you cannot get more time.” – Jim Rohn

“Money, if it does not bring you happiness, will at least help you be miserable in comfort.” – Helen Gurley Brown 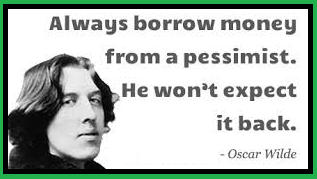 “Money is better than poverty, if only for financial reasons.” – Woody Allen

“Money is not the most important thing in the world. Love is. Fortunately, I love money.” – Jackie Mason

“What difference does it make how much you have? What you do not have amounts to much more.” – Seneca

“If you want to know what God thinks about money, just look at the people He gives it to.” – Dorothy Parker

“It doesn’t matter if you’re black or white… The only color that really matters is green.” – “The Family Guy”

“Money is the opposite of the weather. Nobody talks about it, but everybody does something about it.” – Rebecca Johnson

“Lack of money is the root of all evil.” – George Bernard Shaw

“The safest way to double your money is to fold it over and put it in your pocket.” – Kin Hubbard

“The chief value of money lies in the fact that one lives in a world in which it is overestimated.” – H. L. Mencken

“You use your money to buy privacy because during most of your life you aren’t allowed to be normal.” – Johnny Depp

“It is pretty hard to tell what does bring happiness; poverty and wealth have both failed.” – Kin Hubbard

“A bank is a place that will lend you money if you can prove that you don’t need it.” – Bob Hope

“Money frees you from doing things you dislike. Since I dislike doing nearly everything, money is handy.” – Groucho Marx