How Will the New Tax Law Affect Me?

By David Bryant | July 9, 2018
The newly introduced tax reforms have far-reaching implications that depend on your unique situation, as well as several other factors. Many times, changes in the tax code are not implemented exactly how they are intended. The IRS may choose to interpret and enforce the laws in a slightly different manner.

Please consult with your CPA or EA when completing your taxes. We are always here to assist both you and your tax preparer.

On December 15, 2017, the House of Representatives and the Senate Conference Committee released a unified version of the Tax Cuts and Jobs Act 2017 (TCJA). Its intention was to reform the individual income tax code by lowering tax rates on wages, investment, and business income, to broaden the tax base, and to simplify the tax code. Simplification may not have been achieved as there are still seven tax brackets for individuals, the Alternative Minimum Tax (AMT), and many deductions. 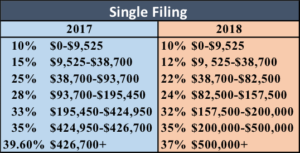 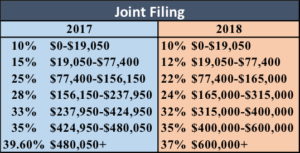 However, to make up for the loss of Personal Exemptions (for children), Congress increased the Child Tax Credit from $1,000/child to $2,000/child. Additionally, they increased the phaseouts from the current levels of $75,000/single and $110,000/married to $200,000/single and $400,000/married. The threshold increase allowed a larger percentage of the population to benefit from the tax credit.

The early proposals for tax reform were to eliminate the deduction for “State & Local Taxes” (SALT) and property taxes. This hurts high tax-states significantly more than low tax-states, California for example. After the negotiations, the politicians settled on a maximum deduction of $10,000 for a combined SALT and property tax. This limit is applied to both individuals and married couples. For couples who are married filing separately, the limitation is reduced to $5,000.

The final bill reduced the cap on interest rate deductibility from $1,000,000 to $750,000 on mortgage debt incurred to purchase, build, or substantially improve a primary residence or designated second home. In addition to lowering the deductibility limits, the bill eliminated the deductibility of home equity loans completely if the funds are NOT used to improve the home.

Under the previous tax law, spousal support payments were deductible by the Payor and taxable to the Payee; however the couple could choose to waive taxability. Considering that most payers of spousal support are the “breadwinners” of the family, this change effectively increases the taxable income of the Payor. This change will be effective on divorce agreements signed after December 31, 2018.

Miscellaneous deductions subject to the 2% floor of your Adjusted Gross Income (AGI) were eliminated. Job expenses such as tools & supplies, uniforms, dues & subscriptions, unreimbursed travel, and home office expenses will no longer be deductible. This only affects employees who are claiming expenses on a Schedule A or a W2 Employee. This does not affect 1099 employees as they file expenses on a Schedule C.

The medical expense deduction was expanded retroactively for the 2017 tax year and for the 2018 tax year. The AGI threshold decreased from 10% to 7.5%. Consequently, more people will be able to take advantage of this itemized deduction. The threshold reverts back to 10% in 2019.

Treatment of 401(k) Loans after Termination

Effective January 1, 2018, if the plan loan offset is due to plan termination or severance from employment, instead of the usual 60-day rollover period, you have until the due date, including extensions, for filing the Federal income tax return for the taxable year in which the offset occurs.

This is a huge benefit for people who want to retire just prior to reaching age 59.5 can take advantage of.

The Tax Cuts & Jobs Act is the most substantial tax reform legislation enacted since President Bush’s tax cuts of 2001 and 2003. The act most importantly reduced the tax brackets, expanded the standard deduction & child tax credit, capped SALT & property tax deduction, reduced the mortgage interest deduction cap, eliminated miscellaneous itemized deductions and reduced the corporate tax rate to 21%. It is important to note that the personal tax changes are only temporary and will lapse in 2025. The corporate tax cut is the only piece of the bill that is permanent.

Want to talk about what the new tax law could mean for you? Schedule a time to talk now.

“Many consumers are confused and overwhelmed by the nuance of the tax code, and this new legislation is no exception,” said Robert Katch, Manchester Financial President.

Pease Limitation Repealed: In addition to changing the Tax Brackets the TCJA repealed the Pease Limitation. The Pease Limitation effectively reduced higher income earners ability to itemize their taxes by 3%. It began to phase in once an individual’s income reached $261,500 ($313,800 for married couples).

Qualifying Dependents: A $500 tax credit applies to dependents who are not qualifying children (under 17 years old). This includes older college age children who are still claimed as dependents.

Individual Mandate Repealed: The individual mandate for healthcare insurance has been repealed beginning in 2019. It will stay in place for the 2018 tax year.

Moving Expenses: Starting in 2018, moving expenses are no longer deductible for non-military personnel. Furthermore, moving expenses paid for by the employer will be considered taxable income to employees.

1031 Exchange: These exchanges now only apply to real estate. Previously one could exchange classic cars, boats, and airplanes.

Simplified Tax Bracket for Estates and Trusts: The number of tax brackets for estates and trusts was reduced from seven to four: 10%, 24%, 35% and 37%. The impact of this change is not significant as it only takes $12,500 of income to reach the top bracket.

Charitable Contribution Limits: The limit has been increased from 50% of AGI to 60% of AGI.

Kiddy Tax: Previously, the unearned income for children younger than 19 years old was taxed at the parent’s marginal tax rate for amounts over $2,100. Under the new tax code, the income will be taxed at the trust rates.

Capital Gains & Qualified Dividend: Nothing material has changed and the thresholds for those in the 0%, 15% and 20% tax brackets are the same as before. The Medicare surcharge of 3.8% still applies.

College 529 Plans & Other Education Reform: 529 Plan distributions can cover private elementary and high school expenses up to $10,000 annually. Additionally, the funds can be used to cover homeschooling costs.

Alternative Minimum Tax: This dreaded tax was not repealed. However, the number of households being hit with AMT will be reduced.

Estate & Gift Tax Exceptions: The unified estate and gift tax exemption have been doubled from $5.6 million to $11.2 million. This increase means estate planning is becoming less relevant in terms of Federal Taxes. However, it is still relevant for states taxes.

Business Entertainment Expenses: Activities that are considered entertainment, amusement, or recreation are no longer deductible starting in 2018.

Business Car Depreciation: Cars purchased by businesses are now allowed to be depreciated more quickly. This depreciation will make purchasing a vehicle more competitive with leasing for business owners.

20% Deduction for Pass Through Entities: This is a complicated portion of the legislation that benefit people invested in partnerships, LLCs, or S Corporations. It allows passive income to be taxed at lower than ordinary income rates. If this applies to you, I highly recommend using a quality CPA or EA to help prepare your taxes.